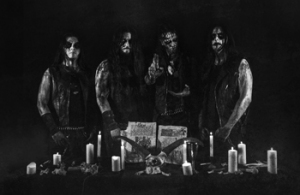 NOCTEM is a Black Death Metal band with a wide career of more than 17 years.
With 2 demos, 1 live LP and 5 albums released through labels such as Prosthetic Records, Art Gates Records, NHR and Metal Blade Records.
After all these years Noctem is one of the most active acts from Spain. The band played on several
relevant festivals and more than 25 tours through Europe, Asia, Russia and North America, sharing the
road with well known acts such as Marduk, Batushka, Enthroned, Impiety, Napalm Death,
Samael, Gorgoroth, Nargaroth, Keep of Kalessin, Taake, Immolation, Vomitory, Malevolent Creation, Incantation, Hate, Ragnarok, Melechesh
and many more...

Noctem counted with the collaboration of Christos Antoniou and Seth Siro Anton from SepticFlesh in previous releases.
The artwork of "Haeresis" was designed by Seth and the orchestral version of the track "Divinity" was arranged by Christos Antoniou.

In 2016 Noctem released its album "Haeresis" through Prosthetic Records and Art Gates Records with an exclusive edition of 666 copies ( the "Death scent edition").
This was the first time an album is released in such conditions.
In summer 2017, Noctem released its home made beer "A Cruce Salus", the same year the singer Beleth released his philosophycal book "Codex Ante-Mortem" and featured in the cover of Metal Hammer Magazine (Spain) (issue n°362).

The band will release it's 5ª studio album "The Black Consecration" in Samhain 2019.
» Zurück zur Übersicht